The Mineral Resource estimate has been prepared by independent consultants, CSA Global Pty Ltd (“CSA Global”) and is reported in accordance with the JORC Code (2012 Edition). 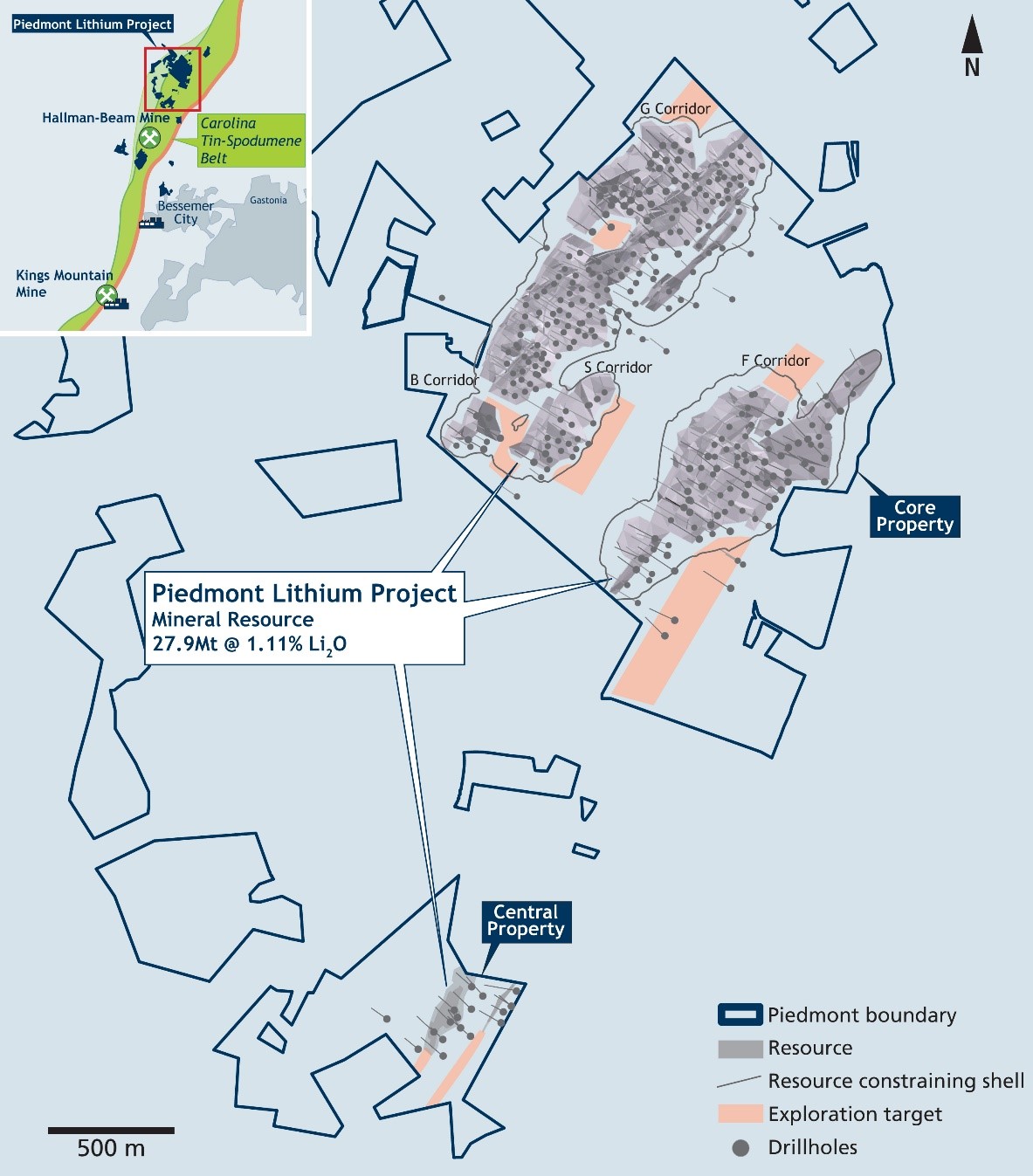 In June 2019 an updated Mineral Resource estimate (“MRE”) for Piedmont’s wholly owned Piedmont Lithium Project in North Carolina, USA was prepared by independent consultants, CSA Global Pty Ltd (“CSA Global”) in accordance with the JORC Code (2012 Edition).  This update featured an increase of the Mineral Resources on the Company’s Core Property to 25.1Mt at 1.09% Li2O.

An important feature of the Core MRE, is that 74% or 18.6 Mt is located within 100 meters of surface.  The details of the MRE with regards to depth from surface are shown in the table below.

To date, drilling on the project’s 1,004-acre Core property consists of 326 holes totaling 51,047 meters.  The MRE utilizes all 326 holes.  In general, drill spacing ranges between 40 – 80m.  Dike areas tested by drilling at 40m lateral and downdip spacings were eligible to receive an Indicated resource classification, whereas areas with wider spacings received an Inferred resource classification.  A plan view showing the Indicated and Inferred classification areas is shown in the figure below. 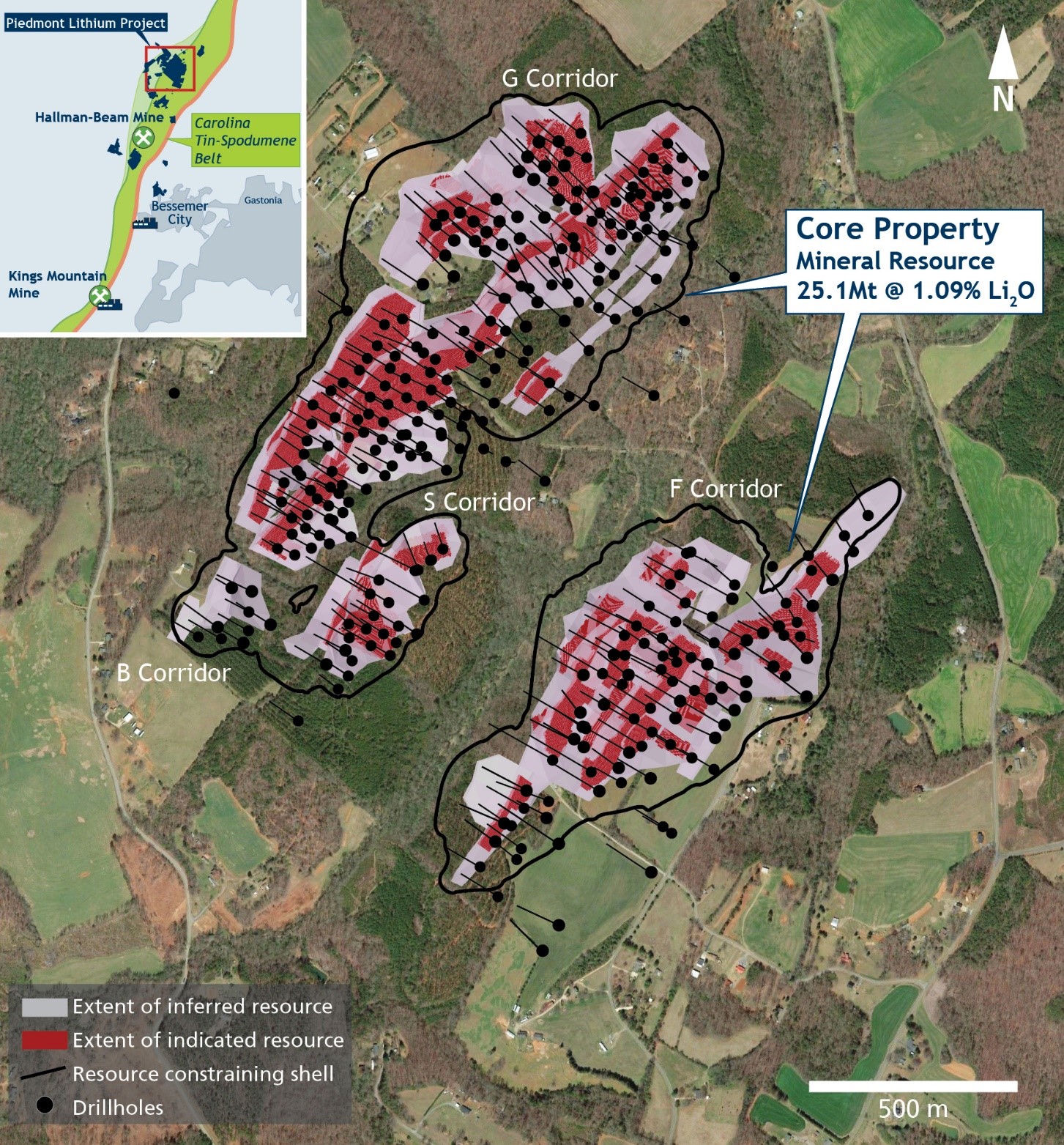 The figure below shows a view (looking northeast) of the MRE block model at various grade cut-offs. 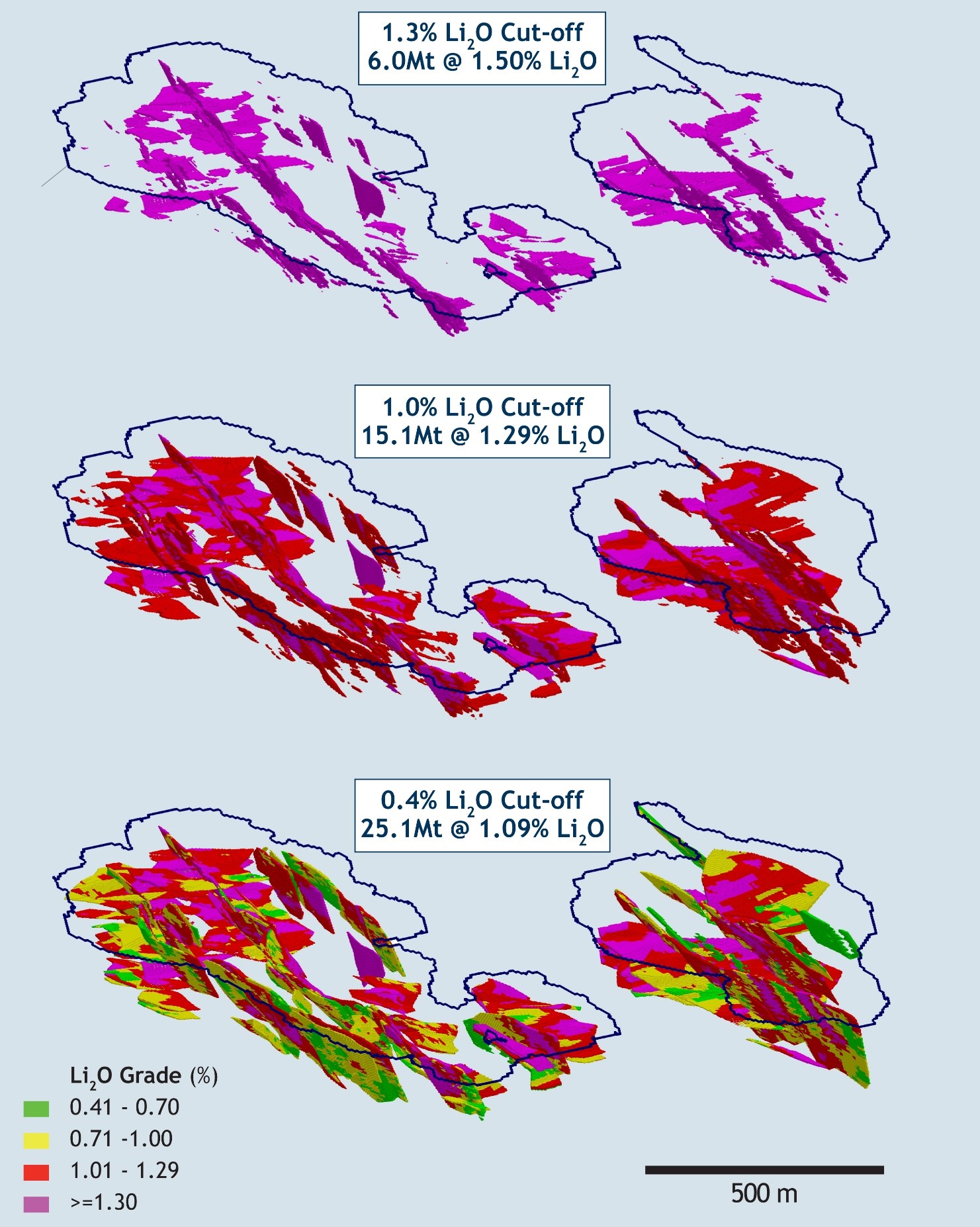 A grade-tonnage curve for the Core Property is shown below. 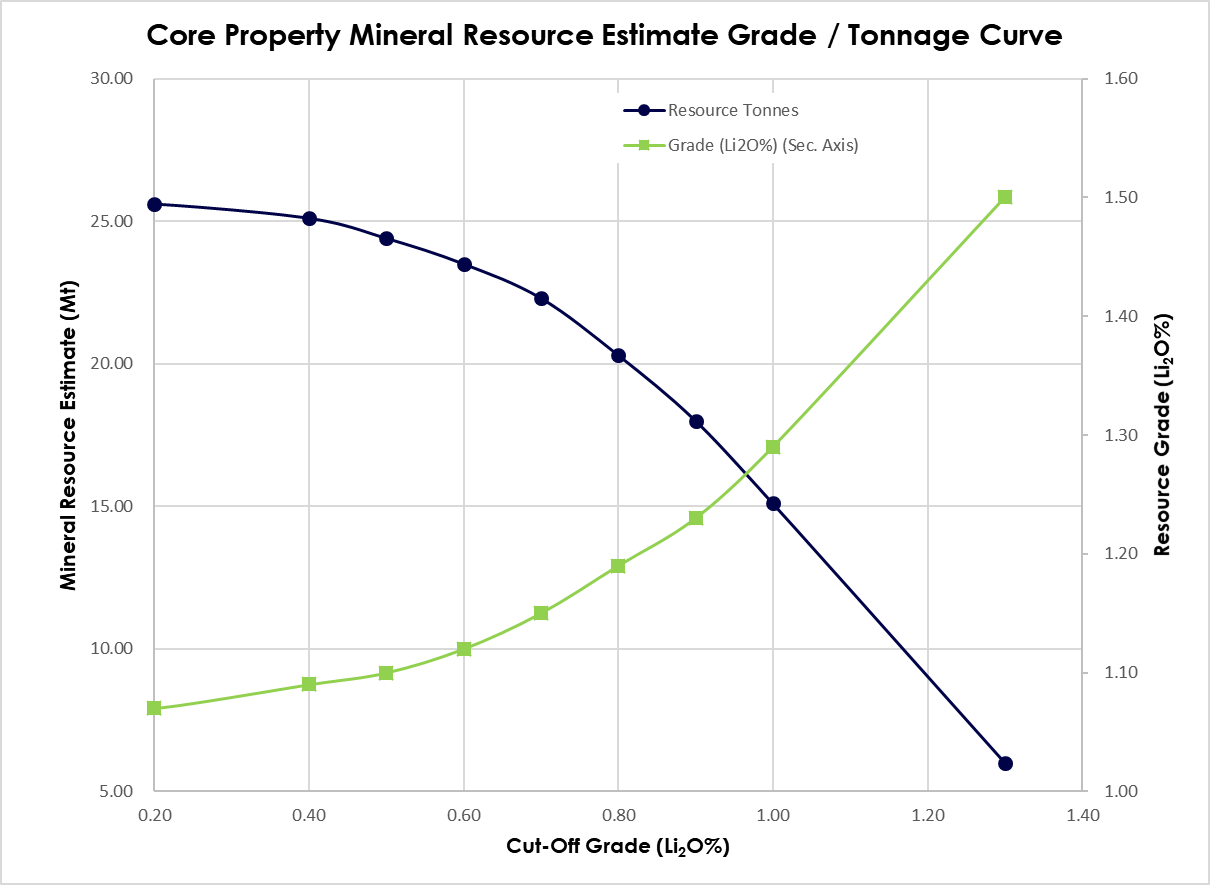 The reported Central Mineral Resource estimate (“MRE”) was based on 18 diamond core holes totaling 2,840 meters. Significant intercepts were encountered in all 18 holes.  The Central deposit is open in all directions. The Central Property is located approximately 1 mile south of the Core Property. 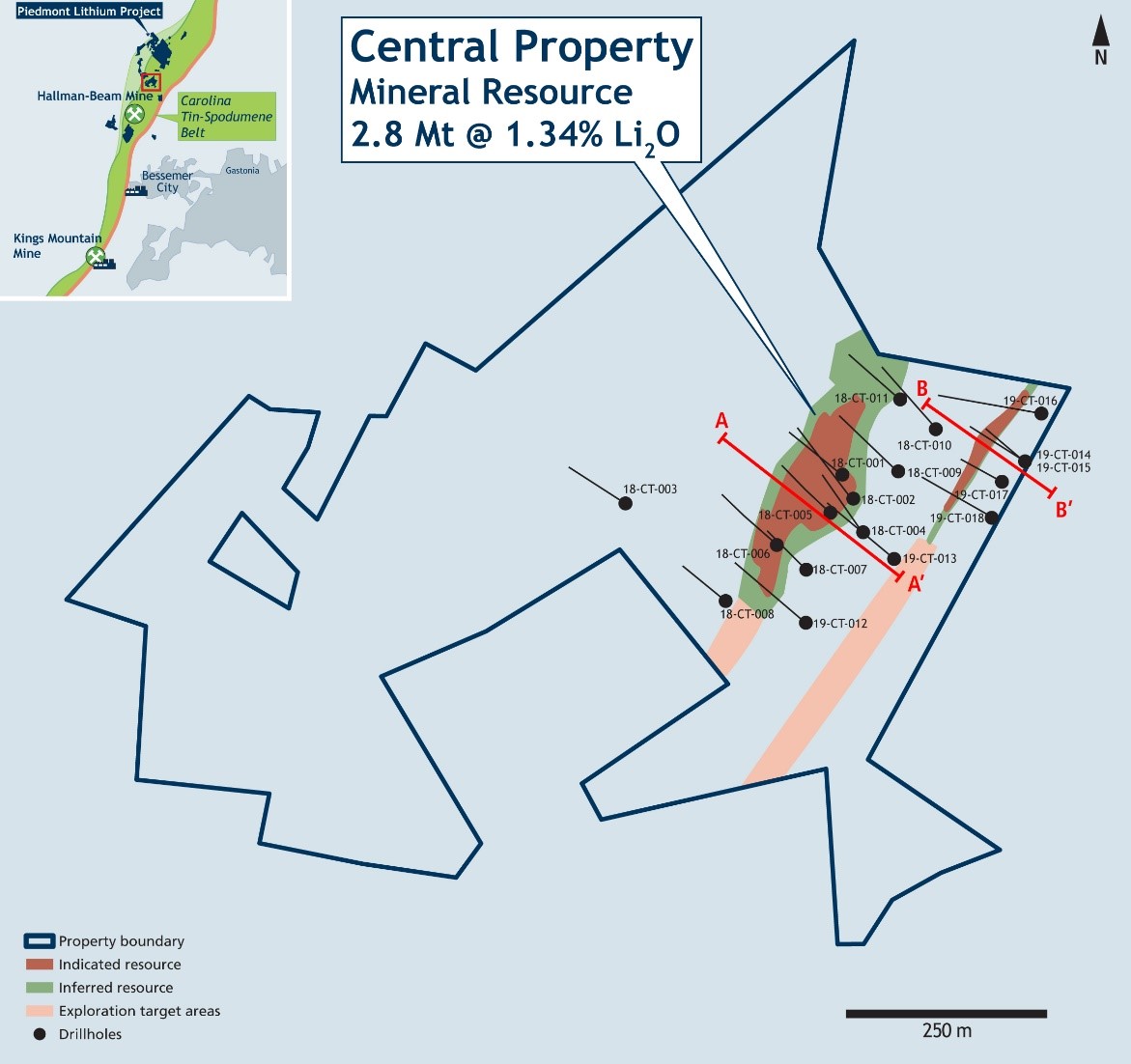 The resource is comprised of two sub parallel northeast trending spodumene bearing pegmatite dikes.  The western dike is defined by 11 drill holes for a strike length of 370 meters and to a depth of 230 meters.  This dike dips steeply to the southeast and remains open in all directions.

The eastern dike has been intersected by 5 drill holes, traced for 220 meters and is nearly vertical in its orientation.  The dike is high grade and has produced some of Piedmont’s best drill results to date including 43.2 meters @ 1.73% Li2O.  This dike also remains open in all directions. 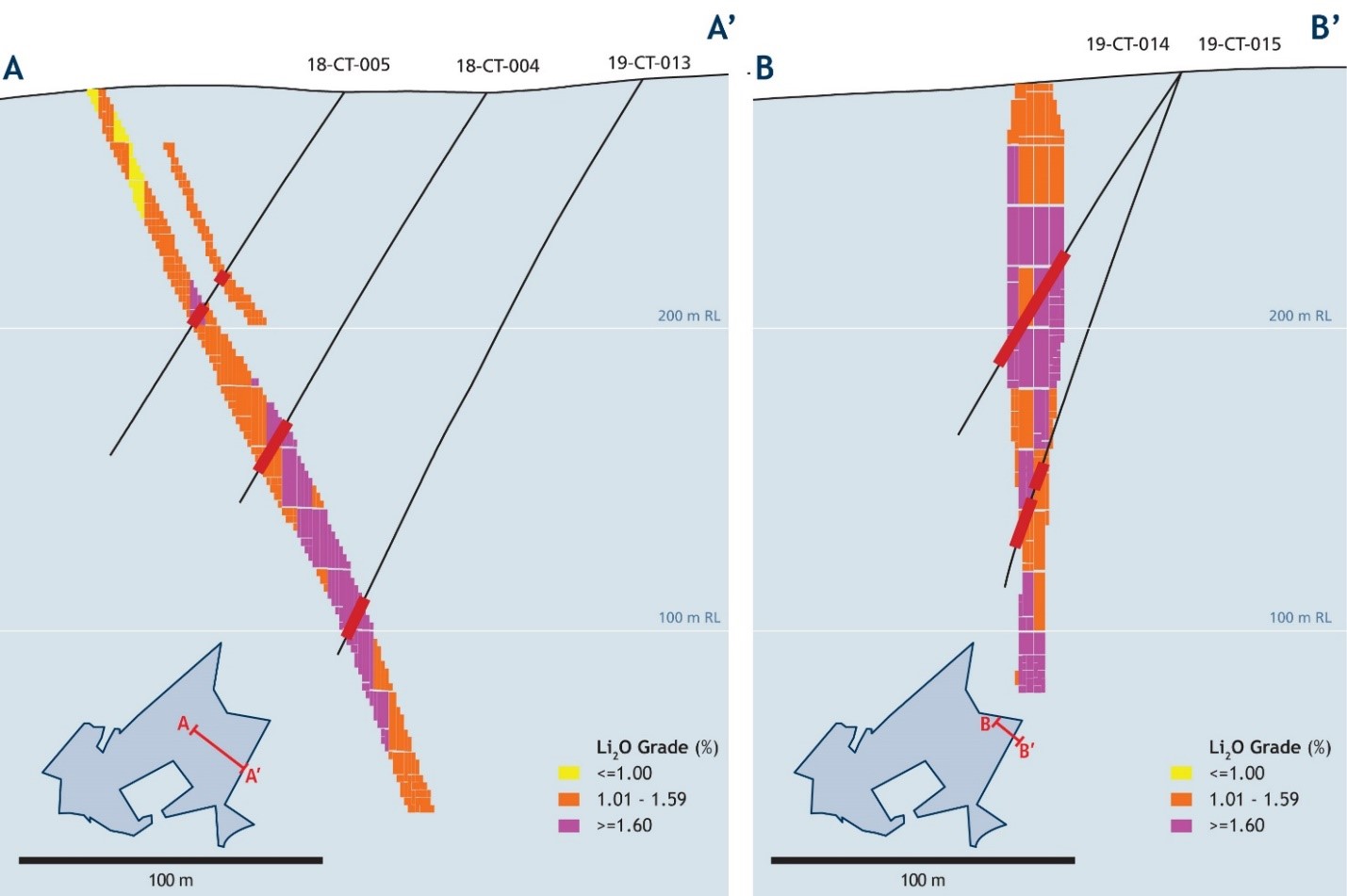 Piedmont has been advised that the relatively pure spodumene character of its ore body is unusual and highly positive, allowing for a simplified flowsheet to produce strong lithium recoveries. Certain hard rock lithium projects are understood to contain multiple lithium-bearing minerals (petalite, lepidolite, zinnwaldite, etc. as well as spodumene).

The industrial minerals represented by Piedmont’s by-product Mineral Resource Estimates are fundamental inputs for regional industries that Piedmont can economically service given its location in the heart of the Mid-Atlantic industrial corridor.

Surface mapping suggested a shallow to moderate west-southwest dip of banding and mineral layering with in the outcrop blocks, therefore the initial three holes were focused on the western most outcrop exposure where the holes were oriented north-northwest with a -55 degree dip. 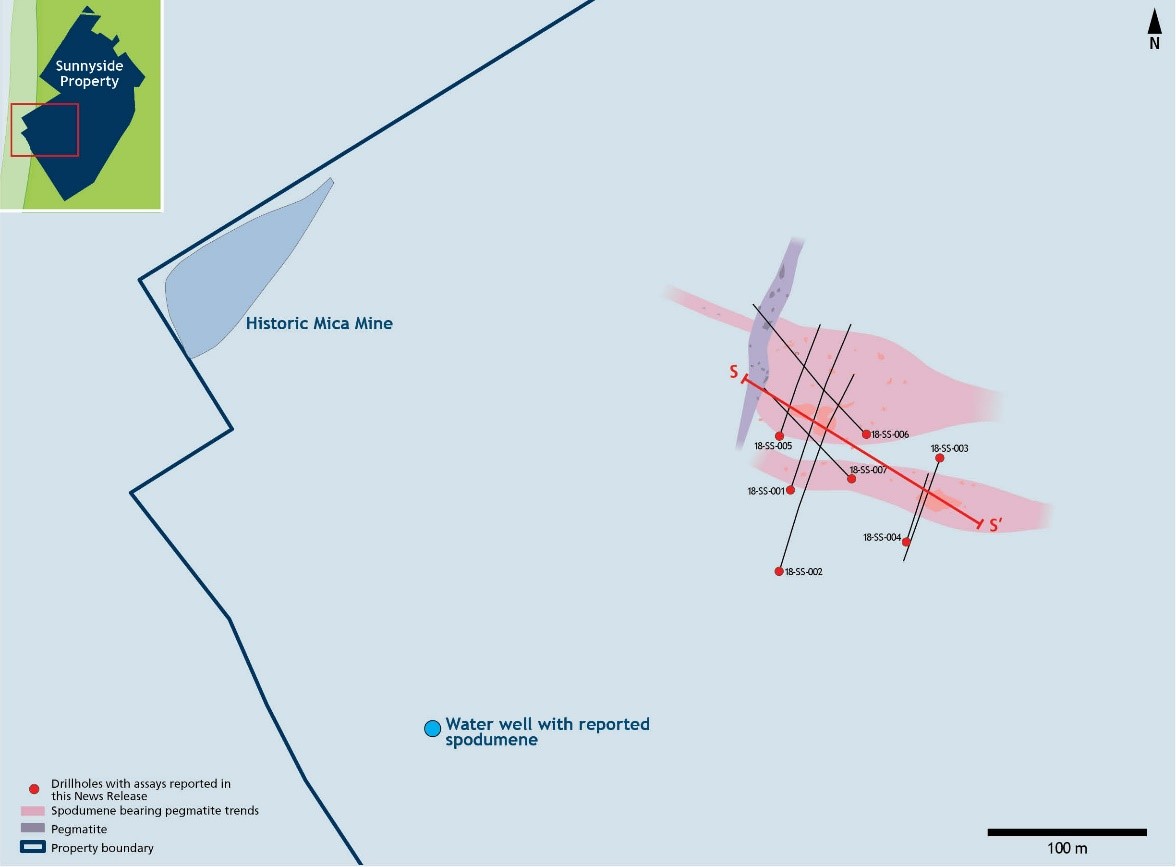 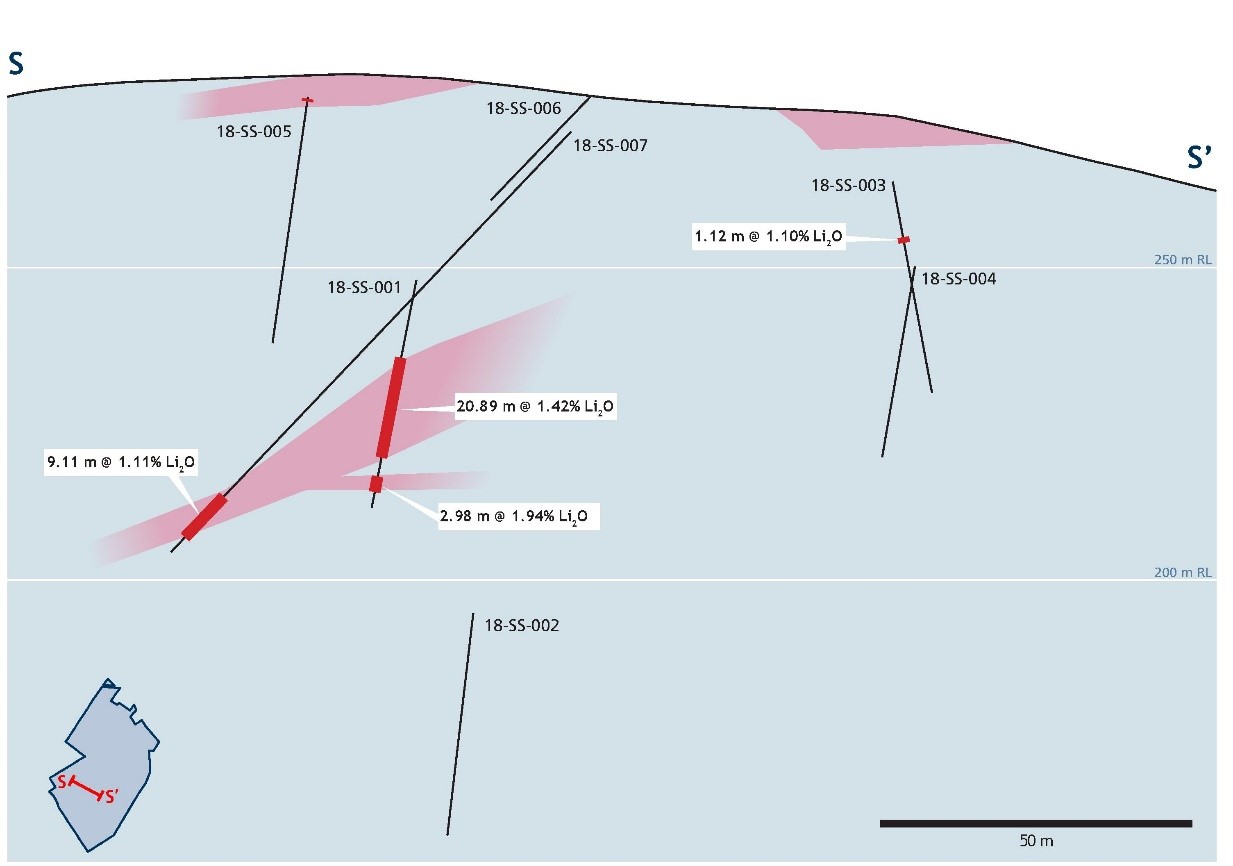