In January 2018, Piedmont Lithium announced the commencement of a Scoping Study at the Piedmont Lithium Project to address a fully-integrated project including mine, concentrator, and lithium conversion plant. The Company expects to complete the Scoping Study in the third quarter of 2018 and will be published shortly after the announcement of a maiden Mineral Resource in the second quarter of 2018.

In December 2017, Piedmont Lithium announced a new comprehensive 20,000-meter drill program at the Piedmont Lithium Project that is currently underway and focused on completing infill drilling for the definition of a maiden Mineral Resource and also aggressively testing the extensions of the pegmatites identified both along strike and down dip.

In addition, based on the drilling results on the portions of the Project explored to-date and geological modelling of the pegmatites, an initial Exploration Target of between 10 to 15 million tons at a grade of between 1.00% and 1.25% Li2O is currently estimated.

Importantly, the completion of the Phase 1 drill program together with the historical drill program and exploration campaigns have allowed the Company to establish the presence of four major, high grade lithium corridors on the Project.

On surface, these corridors are defined by semi continuous zones of outcrop, subcrop, and float blocks of mineralized pegmatite. The corridors, total in excess of 4 kilometres of mineralized trend within the Project. Approximately 85% of the 4+ kilometres are unexplored by drilling which will be the focus of the Phase 2 drill program. Each corridor has the potential to host high grade, thick mineralisation as was seen in the majority of the Phase 1 results. Further details on each mineralised corridor is explained below. 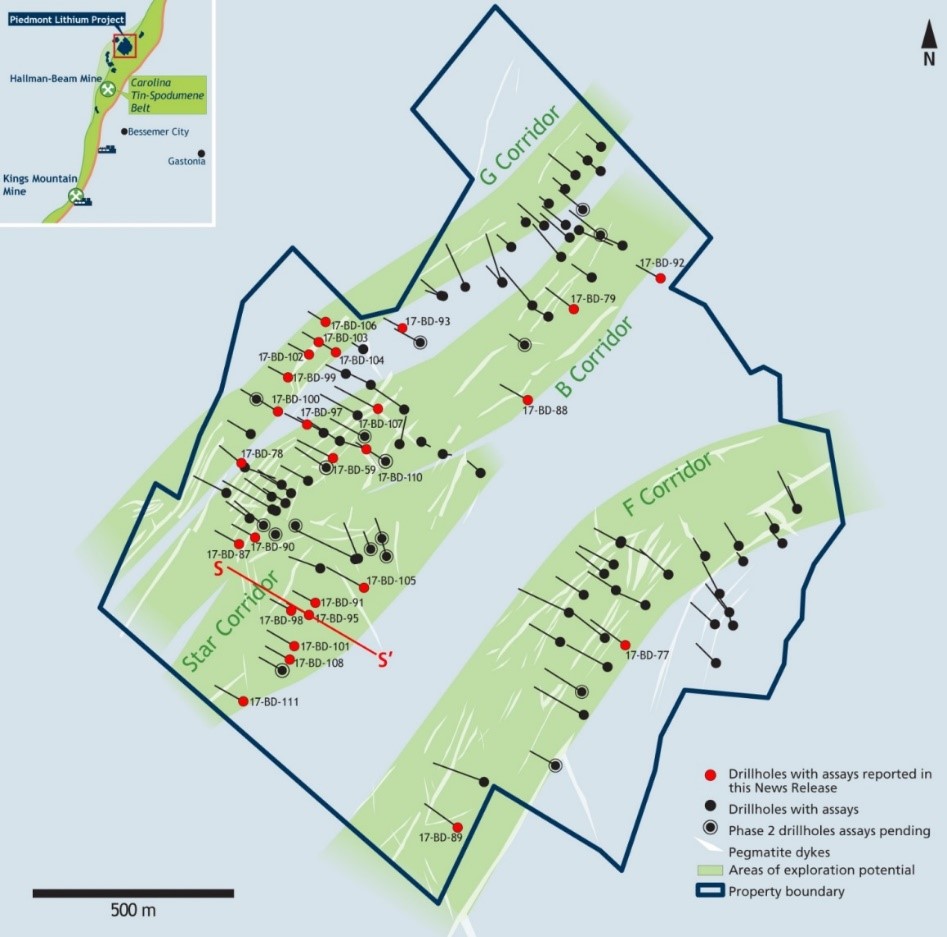 The G Corridor is the most north-western Corridor and is ~1.6 kilometres in length. It hosts multiple spodumene bearing dikes that have a northeast-southwest trend and dip moderately to the southeast. To date, only 10 holes have been drilled in the G Corridor with all returning mineralized intercepts; 9 of the 10 holes were focused within a 250-metre-long zone in the northeast portion of the corridor where historic drilling confirmed multiple mineralized pegmatite dikes and more specifically, the presence of a thick mineralized pegmatite which the Company has named the G-1 Pegmatite.  The remaining single hole in the G corridor is located 970 metres to the southwest where 10-BD-16 intercepted high grade lithium mineralisation. 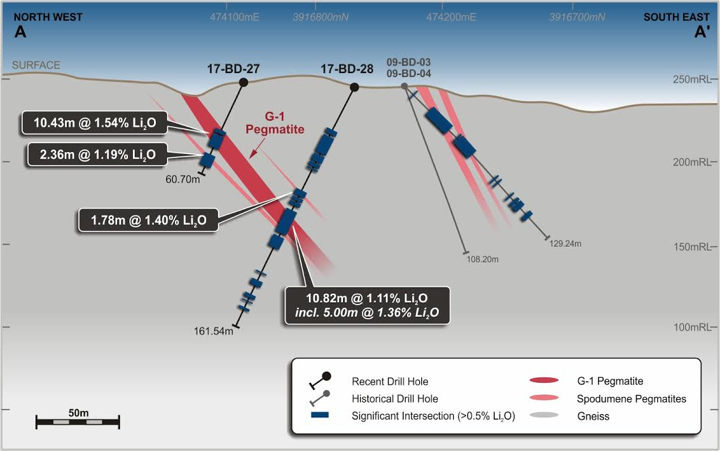 Cross-section of the G Corridor

The B Corridor is a northeast-southwest trending corridor ~1.4 kilometres long. Drilling has confirmed that at least one set of dikes has a moderate southeast dip, however surface data suggests that other dike sets may have northwest and sill like orientations. 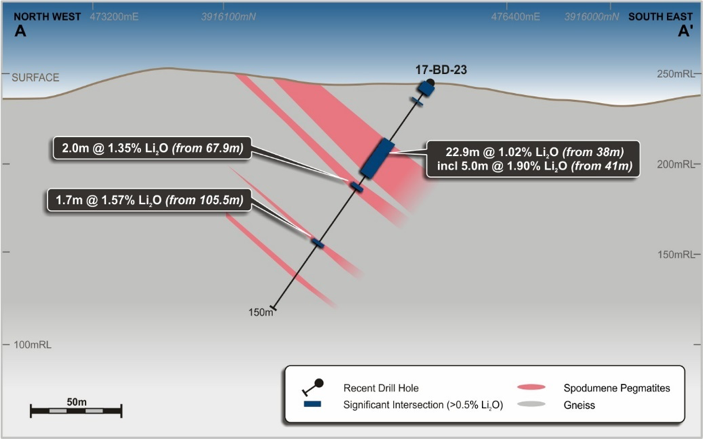 To date, 10 holes with the majority (7 holes) have been drilled in the southern portion of the Corridor. The Phase 1 drilling followed up on historical mineralized pegmatites intersected in 10-BD-17, holes 17-BD-20 to 17-BD-23 all intersected multiple mineralized dikes. The Phase 1 drilling tested and confirmed dike continuity for 140 metres along strike and 100 metres down dip and remains open in all directions.

The F Corridor is located in the South-East and is ~1.4 kilometres long. To date, 6 holes have been drilled and all intersected mineralisation. Initial interpretations for the results of 17-BD-29, 30 and 31 suggest a southeast dip for the pegmatites, however a second set of dikes at a crosscutting orientation is possible. 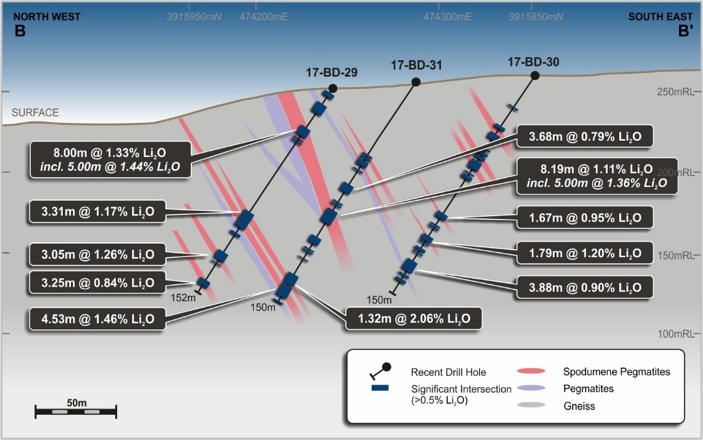 Cross-section of the F Corridor

Surface mapping confirms the spodumene bearing dikes have multiple orientations suggesting a more complex structural setting with the potential for very thick mineralisation. The drilling for this corridor consists of only five historic holes, all of which intersected mineralization. 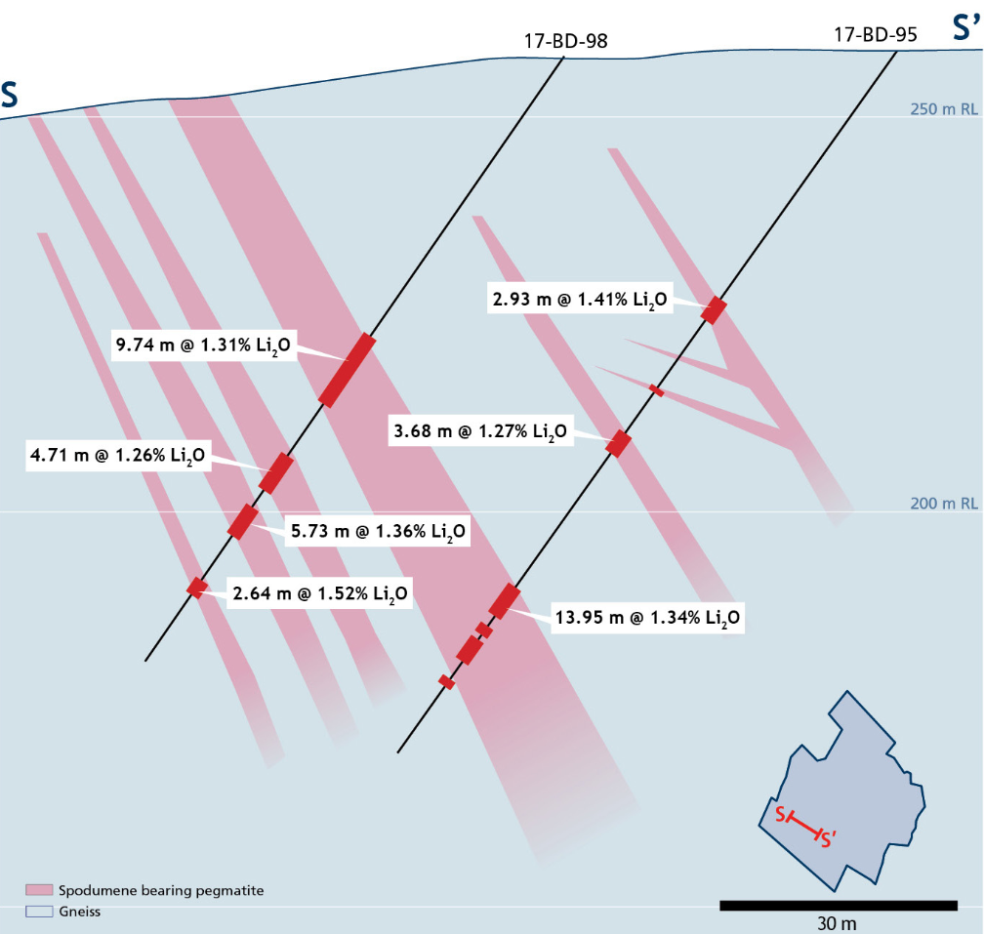 In November 2017, Piedmont Lithium completed the 93-hole Phase 2 Drilling Program and announced confirmation of high-grade lithium mineralization along the 4km of strike within the property.

Geological modelling on the Phase 2 drill results reveal a world-class mineral system with the presence of 38 pegmatite bodies across the 4+ kilometers of strike length on the Project within approximately 100 meters of the surface.

Logging, sampling and shipping of all Phase 2 drill core samples have been completed. Based on the drilling results on the portions of the Project explored to-date and geological modelling of the pegmatites, an initial Exploration Target of between 10 to 15 million tonnes at a grade of between 1.00% and 1.25% Li2O has been estimated by CSA Global.

The Company commenced a 20,000-meter Phase 3 drilling campaign in December 2017.  This new drill program includes infill drilling for the definition of a maiden Mineral Resource as well as testing of extensions of pegmatites down dip and along strike.  Upon completion of infill drilling Piedmont Lithium plans to announce a maiden Mineral Resource in the second quarter of 2018. 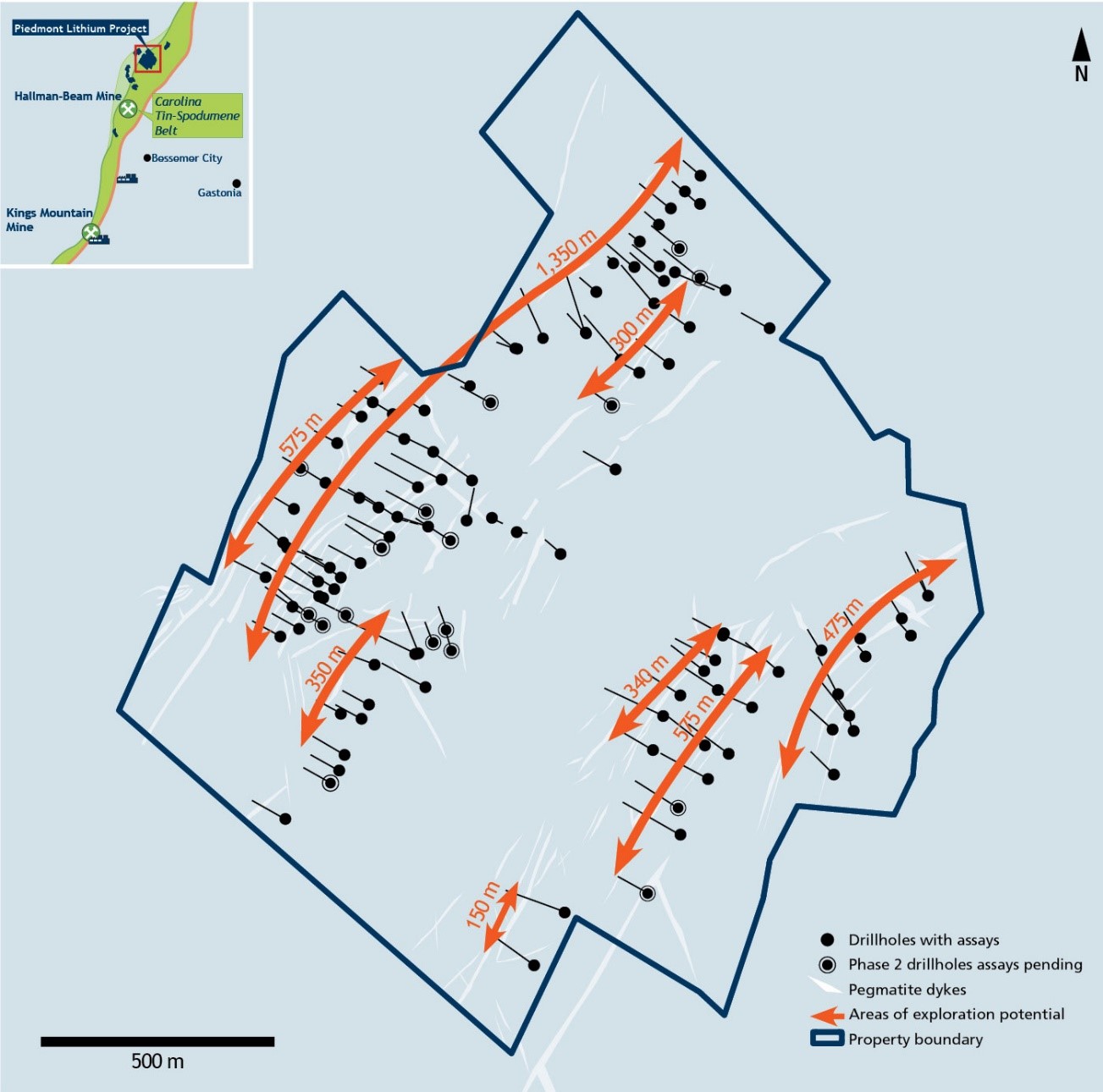 Generally, the holes are designed at 80 to 100 metre spacing laterally and 40 metre spacing down dip. Areas of more significant mineralization may be drilled on a tighter spacing and test to greater depths.  The results of this second phase, together with the first phase and historical exploration and drilling campaigns, will continue to build upon the understanding of the lithium bearing geology for the Project and ultimately yield a maiden Mineral Resource estimate for the property.

The Company is confident of its ability to delineate further high grade intercepts in this drilling campaign which will showcase the potential for the Project to become a leading US based developer of lithium raw material supply into the growing US domestic Electric Vehicle and Battery Storage markets.

Upon completion of the second phase drilling campaign the Company intends to estimate a maiden JORC / NI 43-101 compliant Mineral Resource for the Project.

Results from the historical exploration campaign and preliminary core logging from the current drilling campaign shows pegmatites with thicknesses from shallow depths which leads to the potential for an open pit mineable deposit to be delineated in the region.

The Inner Piedmont belt is typically characterized by Cambrian or Neoproterozoic gneisses, amphibolites, and schists of varying metamorphic grade (Gair, 1989).  These rocks all lack primary structures and their relationships between one another is undetermined (Gair, 1989).  Several major intrusions occur in the Inner Piedmont, including the nearby Mississippian-aged Cherryville granite (Kish, 1983). Concurrent dike events extend from the granite, mainly to the east, with a strike that is sub-parallel to the northeast trending Kings Mountain shear zone.  As the dikes progressed further from their sources, they became increasingly enriched in incompatible elements including lithium. The enriched pegmatitic dikes are located within a 3.5 kilometres wide zone extending from the town of Kings Mountain through Lincolnton, this zone is known as the Carolina Tin-Spodumene Belt. The Project lies within the TSB. 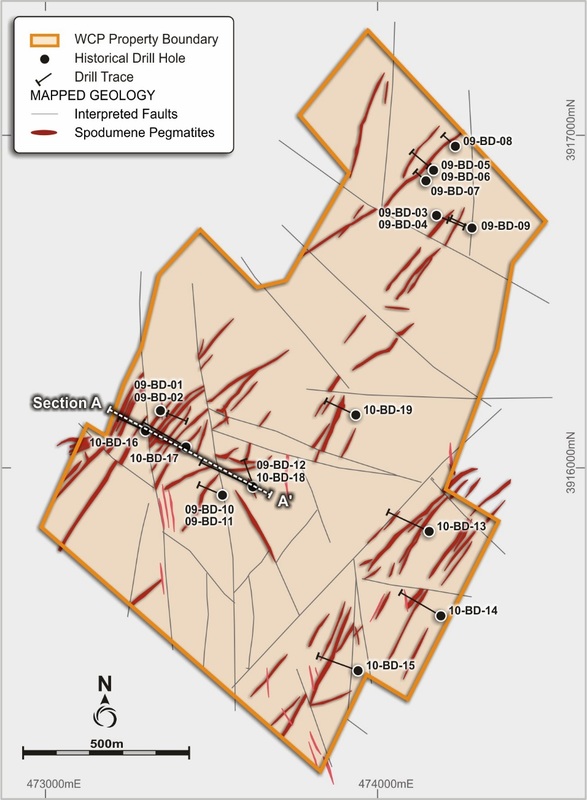 North Arrow Minerals Inc. (“North Arrow”) explored the Project in 2009 and 2010, prior to North Arrow changing its focus to gold and base metal opportunities due to the significant fall in lithium price in 2010.

The 2009 and 2010 diamond drilling programs undertaken by North Arrow consisted of 19 holes totalling 2,544 metres. North Arrow collected a total of 543 assay samples from 17 of the 19 holes, no assay samples were collected from two holes. The drill holes were designed to test spodumene-bearing pegmatites identified from surface geological mapping.

Seventeen of the 19 holes intersected significant spodumene-bearing pegmatite, with the individual intercepts ranging in thickness from 1 to 13 metres (down-hole thickness). The pegmatite intercepts typically returned weighted assay results from 0.8% to 1.5% Li2O.

Commonly multiple spodumene-bearing pegmatites are intersected within the drill holes. As an example, 8 individual mineralised pegmatites were intersected in Hole 10-BD-17. The interpreted cross-section for holes 10-BD-16, 17 and 18 shows the stacked nature and steep to moderate easterly dip of the pegmatites.

Drilling displayed that the pegmatites predominantly trend northeast-southwest, and are hosted in an amphibole-biotite gneiss that rarely outcrops due to a deep weathering profile. Generally, the pegmatites intersected in drilling correlate well with the surface exposures observed in the geological mapping.

Thick zones of high grade mineralisation have been recorded at shallow depths, with selected intercepts including:

Building upon the historical work completed on the Piedmont Lithium Project the Company embarked on a Phase 1 drilling campaign to further understand and delineate the lithium bearing pegmatites on the core landholding.

The Company completed its maiden Phase 1 drilling program at the Project during the second quarter 2017 which consisted of 12 diamond core drill holes, totalling 1,662 metres.

Phase 1 drilling program at the Project encountered thick zones of high grade mineralisation at shallow depths, with selected intercepts including:

Results from the Phase 1 drill program together with the historical exploration highlight the potential for the Company to define a strategic, US lithium resource and becoming a key U.S. based developer of lithium raw material supply into the growing US domestic Electric Vehicle and Battery Storage markets.

Significant, high grade mineralization was intercepted in all core holes with grades ranging from 0.90% to 2.06% Li2O.